You could easily be forgiven if you have not heard of love lock locations as this is a fairly modern trend that is fast becoming a tradition among committed couples. The habit or trend began in the early 2000’s and is steadily growing in popularity. For those unfamiliar with the idea it involves taking a padlock to a public monument, most often a bridge, attaching it to the monument and then throwing away the key. It is supposed to symbolize the eternal love the lovers have for each other.

Some monuments are more popular than others for love locking, with evidence of many couples having declared their eternal love attached to various parts of the structure, and naturally some monuments such as metal bridges lend themselves better to having padlocks attached than others do. Couples can do this at any time but Valentine’s Day is a particularly popular occasion for this new love trend. The following are some of the more interesting love locking locations around the world. 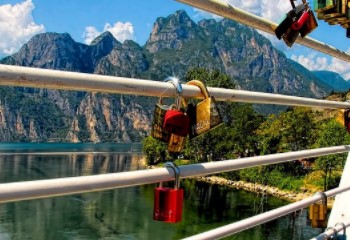 It is thought that the custom of locking your love began here hundreds of years ago despite it seeming to be a fairly modern custom. The Huangshan Mountain climbs steeply into the clouds and it is legend that if you reach the summit, lock your padlock and then toss the keys down into the abyss your love will be eternal. The trails leading up the mountain are very dangerous and so many padlocks are dotted along the lower elevations.

Given the nickname of the Love Bridge it is little wonder that this is a monument that has witnessed many couples declaring their eternal love for each other by the locking of a padlock. In 2010 all of the existing padlocks were removed from the pedestrian bridge over the River Seine but since then many have been replaced but featuring the original dates, indicating that the Love Bridge is a great tourist attraction that many return to. The locks are now left where they are placed until the weight of them makes it necessary for them to be removed.

This beautiful park is home to an interesting and unusual sculpture dubbed the Love Tree. It was expressly designated for the purpose of giving lovers a place to put their padlocks and declare their eternal love. Unlike some structures that can be damaged and/or weighted down by numerous padlocks the Love Tree bears up well under the additional weight.

Unlike the sculpture in Shanghai, this is a real tree; however padlocks are not locked to the tree itself but to a large metal frame that has been provided for this purpose. Adorned with heart shapes the frame holds hundreds of padlocks at any one time.

Much like the Love Bridge of Paris, this bridge over the River Rhine is heavily laden with thousands of love locks that are undermining the structure. Sections of the bridge are so densely covered in the love locks that there is hardly any room for anyone to place a new one. 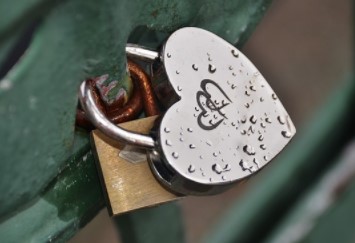 Though traditionally thought of as a country for lovers Italy is a little behind some other areas of the world in observing the custom of love locking. This bridge is beginning to see more activity, with the number of padlocks increasing daily. The first padlocks were attached to a lamp post which became damaged. When a second lamp post became damaged by the locks the city erected 6 lamp posts expressly for the purpose of having love locks attached to them.

Though many lovers have attached their padlocks to the Brooklyn Bridge there are grave concerns for the safety of the structure and those who use it due to the combined weight of the padlocks. As a result the padlocks are removed periodically.

Recognizing the growing need for somewhere safe for lovers to attach their love padlocks a steel mesh and lumber structure was erected in the Distillery District of Toronto, located on Tank House Lane. The structure features a love heart and the word LOVE depicted in large letters, providing ample space for a large number of love locks to be attached.

Sadly, though this custom is romantic and symbolic gesture for Valentine’s Day, the damage the love padlocks are causing historic monuments and bridges is cause for concern for many cities around the world. To this end there is a growing trend for tourist locations to erect specific structures for the sole purpose of providing a place for lovers to attach their locks. As more and more countries embrace this charming custom that need will grow and it is likely that over the next decade such structures will be present in all of the major cities around the world.

Get Earrings For Your Special Lady